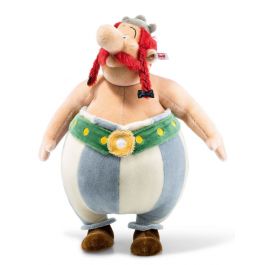 Determined to make Asterix an anti-hero flying in the face of the established order of the world of comic books, René Goscinny certainly did not want to give his main character a sidekick who would play the classic role of stooge.
But Albert Uderzo, somewhat frustrated at not having made Asterix a beefy Gaul like he dreamed, could not resist placing at his side a big strong warrior, more akin to the impressive muscle-bound characters he already excelled at drawing.
Although he had only a minor role in the first adventure, Obelix quickly became an essential character that his authors developed as they went along. He is actually the readers’ favourite hero: all opinion polls place Obelix at the top of the list of favourite village characters. In the adventures penned by René Goscinny and Albert Uderzo, we find him by turns easily offended, sensitive, and definitely a glutton. An overgrown child who grew up too quickly and who is not yet aware of his own strength. In his defence, it must be said that not everyone falls in a cauldron of magic potion when he’s a little boy!
Obelix is the folowing up in the series of Dogmatix and Asterix.