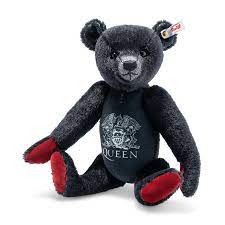 We are proud to announce an exciting new collection entitled “Steiff Rocks!”.
This new series will celebrate and pay homage to some of the greatest artists of all time.
We could not have chosen a more legendary group to feature as our very first artists: Queen!
The classic line up of Freddie Mercury, Brian May and Roger Taylor was completed in 1971, when John Deacon joined the group. Together, Queen created a string of global chart-topping success with singles and albums that are the soundtrack to the last 50 years. Queen are one of the biggest stadium rock bands in the world and many describe their appearance at Live Aid in 1985, as one of the greatest rock performances of all time.
The Queen limited edition Teddy bear is made from stunning black mohair with red velvet paw pads.
The Teddy bear proudly wears the Queen logo crest on its chest. Celebrate Queen, the Champions of British rock, with this unprecedented Steiff Teddy bear.